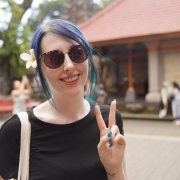 Sadly, our time in Ubud was coming to an end. Planning had started on how we were going to get from Bali to The Gili Islands. The boats to the Gili’s had been cancelled every day since our arrival in Indonesia, due to a dangerous swell between Bali and Lombok.
Checking the internet, it seemed that it was once again safe to cross and boats were running as usual. Due to the volume of people wanting to visit the Gilis, boat tickets had already sold out! Our only option left was to fly. I had read numerous times that when flying Bali – Lombok the only real option was to book flights via Garuda Indonesia due to the sketchy safety rating of competitor Lion Air. Garuda, the safer and more expensive of the two was also fully booked, so reluctantly we went with Lion Air.

Getting from Ubud to Ngurah Rai International Airport was straight forward and took around 90 minutes. We booked a taxi the night before via our hotel, this cost 300,000 IDR (Approx £16).

Booking our tickets via the official Lion site, they provided us with a payment code which we had to present at a nearby Alfamart. Here we paid and received our tickets.
Having read many negative reviews about Lion Air, we were not looking forward to our flight. Many people had commented on long delays and cancellations when booking with them. However, in our one and only experience flying with Lion, our flight left on time and landed early in Lombok. The staff on board were smiling and helpful and we importantly never felt unsafe during the short 25 minute flight. We have no complaints and would book with them again when flying from Bali to The Gili Islands.
Two flights cost 1,398,200 IDR (Approx £77) and we paid 117,000 IDR (£6) for luggage at the airport.

Lombok to the Gilis

At Lombok airport, we grabbed a taxi for 250,000 IDR (£14). The drive took around 2 hours to reach Bangsal harbour. Warning On the way to the harbour we had a great chat with our driver Ryan, who was very friendly and could speak excellent English. Alarm bells started to ring when Ryan kept on saying all boats to the Gili islands are off and the only way to get there is via private transfer. Around 15 minutes from the harbour (thanks Maps.me) he turned into a large, sandy driveway where a man stood waiting next to a small boat. “Only 500,000! What a bargain!” he kept saying “Good price for you!” We declined and asked Ryan to take us to Bangsal as he had agreed. Reluctantly he took us the rest of the way, adamant that the boats would be off when we got there.

As we neared the harbour, devastation from the earthquake a year ago became apparent, it was very sad to see. Ryan explained that they are still trying to rebuild a lot of the houses and buildings that were lost.
We were dropped off at a cafe a few minutes walk from the harbour. Once again we declined Ryans offer of a private boat transfer and walked towards the nearby ticket desk. Low and behold, the boats were all running! We queued up to get our tickets to Gili Meno which were priced at 15,000 IDR (83p) for a slow boat or 85,000 IDR (£4.69) for the fast boat. We opted for the fast boat as this left an hour earlier than the slow boat.
It took around 20 minutes to reach Gili Meno.

Bali to The Gili Islands

It took around 7/8 hours to get from Bali to . We would recommend the Gili Islands to anyone, Gili Air and Meno are two of the most fantastic places we have been. Realistically, you would want to spend a minimum of 4 nights here, as it takes so long to reach via both plane and boat. (Read our experience travelling back to Bali via boat here)

If you would like to help, you can donate to Pelita Foundation, an organisation who aim to help children of Lombok after the earthquake.